I along with my team at Pakistan Association would like to share some details with you regarding our landmark project of Pakistan Centre and Pakistan Medical Centre (PMC). With the near completion of the building construction, we are now working towards the detailed interior work of furnishing the building including the clinic, examination rooms and the installation of the medical equipment.

The good news is that we have been successful in acquiring medical equipment worth Dh. 1.0 million from various sponsors within the United Arab Emirates.

I would also like to share that the CAPEX was revised to Dh 17 million due to added VAT and extended scope of work.

Alhamdulillah, we have come a long way in a short period of the last 24 months and thus so far have received Dh. 12.3 million, other firm commitments of Dh 3.3 million and challenge to raise the remaining Dh 1.4 million.

We hope that after successfully running for the first three years, from the fourth year onwards PMC will be self-sustainable. This would be possible with the subsidized rates that will be charged to patients and with very kind perpetual zakat donations that have been pledged from our generous community members.

The details of the cost incurred and to be incurred & donations received is as follows:

We are very hopeful that with the commitment and passion that the community has shown in raising the first Dh12 million of CAPEX, we look forward to your support in bridging the gap.

With your continued support, we shall soon be proud to inaugurate the U.A.E’s state of the art community centre to serve the society with the highest standards.

We are glad to share some latest pictures of the centre. 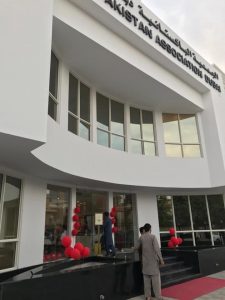 Thank you for your continued support in this noble project.

Tribute to two great visionaries of the east

Allama Iqbal – An Ocean of Wisdom