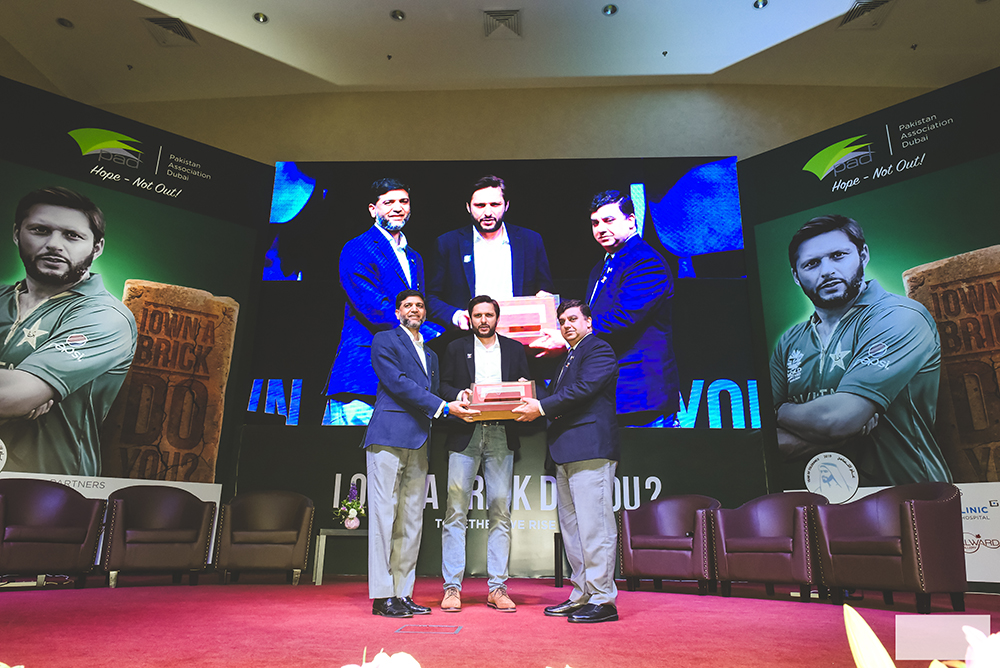 The cricket star completes his promise of 1000 bricks for Pakistan Centre
Shahid Afridi vowed to support young Pakistani sportsmen through the Health and Fitness centre at the upcoming world’s largest community centre for overseas Pakistanis. He was at Pakistan Association Dubai along with numerous cricketers to garner support for the project of Pakistan Centre. On February 27 th , 2017 Shahid Afridi signed a memorandum of understanding with Pakistan Association Dubai to raise a 1000 bricks for the Health and Fitness Centre. Two years later, this was his third philanthropic inning for the project completing his promise and renewing his relationship by patronizing youngsters in achieving their goal in excelling in sports. On this occasion he awarded Sinan Ashfaq Ahmed, an emerging Taekwando player who recently won gold medal for Pakistan at the Fujairah Open Taekwando Championship.

“Afridi is a people’s favorite and owns the responsibility of serving the community through his fame and expertise, it is so encouraging to see him backing youngsters who idolize him” said Dr. Faisel Ikram, President PAD. Dr. Ikram added that this project will be a monument of pride
for the entire Pakistani community and it is heartening to see a sportsman like Shahid Afridi participating and leaving a legacy behind by endorsing the Health and Fitness Centre. Afridi remarked that the Pakistan Association Dubai has been serving the community continuously and it is an honor for me to be part of this project.

“My team in Pakistan does a lot of philanthropic work in remote areas of the country focusing on health, clean water and education. It is my responsibility to look after the less fortunate ones who desperately need our attention” asserted Afridi. He was joined by Shoaib Malik, Muhammad Irfan, Junaid Khan, Shan Masood and Hammad Azam who are all playing for Multan Sultans in the Pakistan Super League. Over 400 people attended the gala evening owning bricks for the community centre. The own a brick campaign kicked off on August 14 th 2016 and the project will be inaugurated on August 14 th , 2019. The concept of owning bricks is to engage each and every member of the community; 15000 bricks are required to build the project. Each brick is Dh1000 and gives every brick owner a membership of the association for 10 years. To engage children, a concept of junior brick had been introduced last year to engage the children. A junior brick is for Dh100 and gives the child a two years membership of PAD.
Pakistan Centre will have a not for profit healthcare facility which will be a first of its kind in the G.C.C by any expatriate community.
Subscribe and receive updates about whats happening in Pakistani Community in Dubai.
Pakistan Association Dubai. , Street 11b, Oud Metha Road,
Bur Dubai ,
United Arab Emirates
04 2305000
pakassoc@pad.ae

Designed & Developed By ❤ Wisdom
Our Spring Sale Has Started

You can see how this popup was set up in our step-by-step guide: https://wppopupmaker.com/guides/auto-opening-announcement-popups/